TO READ THIS ARTICLE IN ENGLISH PLEASE SCROLL DOWN 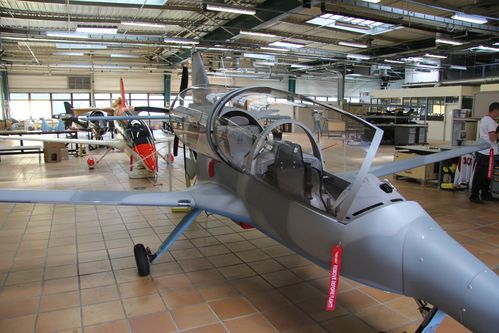 If I use the word geometry, most of you will think about strict rules, calculation formulas or sharp sides and angles. But there exists a figure that is smooth looking. No ! Not the circle, it’s too perfect. I am thinking of one often forgotten, more human, easier to apprehend. What if I gave you a peace of the definition ? «Figure created by viewing a circle in perpective», or «shadow of a disk».
Yes, you’ve got it ! I am thinking about the Ellipse.

In aviation it can easily be found. In the air intake of some jet engines, in the cross section of a fuselage, in the shape of some cockpit canopies. These examples will make you think of jets or fighter planes. It’s intentional.

For this second article on French companies, I want to attract your attention to a jewel to be. But let us start with the product.

At the beginning of the years 2000, Mister Sébastien Lefebvre had the desire and good idea to produce a different airplane. Or should I say an evident airplane. We shall see why.

With strong engineer studies as a background, and also a hands on practice of flying, he studied how to produce a plane that would answer the multiple criteria of strength, light weight, ease of use and maintenance. Without recreating just another two seater looking much like all the other two seaters. The solution seemed evident to him. To use his own terms, «the plane drew itself». First he wanted a high performance and efficient airplane. Mister Bernoulli having crossed his route (in the flow of a fluid, an acceleration is always in conjunction with a drop of pressure), a propulsive propeller imposed itself; maximising lift and reducing irregular flows of the lifting surfaces, while throwing as back as possible the drag related to the prop.

Then, it was necessary to think about productivity, and for this he looked at the master cross-section (maximum area of the cross section) and this imposed a tandem seating configuration.

When the story is told this way it sound like an evidence; but all this was demonstrated and supported by many calculations and tests.

And thus was born the LH-10 Ellipse.

The very pure design thus gives performances to this plane that once were only in the dream of a general aviation pilot.

In May 2004, in the north of France, Sébastien Lefebvre creates LH Aviation to produce this jewel. The clearly stated goal is to have perfect production quality while respecting high level standards. For this, in 2008, the company moves to the Aeronautical Activity Sector of Melun-Villaroche, near Paris.

When one visits the production site, it is clear this goal has been met. The means and tools to design, develop and produce the LH-10 Ellipse are far from a garage operation. We are clearly facing an industrial operation allying quality, seriousness and respect of the customer.

It is in this spirit of customer respect that Sébastien Lefebvre launched a major strategic evolution of the company. Originally designed to be for private use, for leisure flights or primary training, the LH-10 is initially successful and had many pre-orders with down payments. But, in a failing economy with a decrease of private pilots, heavier than ever regulations and certification obligations making the plane more and more expensive, LH Aviation must rethink its strategy. The potential market base has shrunk and in order to honour the original pre-orders it would be necessary to have such an investment in the production facility that profits would be gone before the first delivery.

The product remains a beautiful one. Production quality is at a high level and the plane is one with excellent flying characteristics, good enough for «institutional» use. It is decided at that point to reach out fot these customers and make the company grow.

Monsieur Lefebvre adds the following comments about the institutional markets: they are markets that «enable more stabilised deliveries», and besides «they teach rigorous methods and quality and have a very fast return in experience». When facing these markets one must «know how to face dificulty». It is undeniable that Sébastien Lefebvre is a man of will who knows how to accept a challenge.

The change of strategy was the best one. With participation at the 2009 International Paris Air Show, the first deals are signed to have tests done with the state of Benin in Africa. These tests will lead to an order for 4 planes in 2011. This is followed by a new success in 2013 with the signing of a 1,3 M€ deal with Jet Energy of Dubaï for 10 planes. The LH_10 Ellipse can now take up payloads enabling surveillance and light ground support. Proof of the validity of the concept.

Since the Paris Air Show of 2013 where they were present, LH Aviation has continued its progress and news is still good.

In September 2013, they announced an agreement to purchase 100% of the shares of Infotron, a company specialised in the design and production of drones. The press release states that «this union will enable both companies to create a unique group in Europe, joining our aeronautical know-how with the excellence of the technology of the drone producer, they already sell their IT180 worldwide (a vertical take off and landing drone)».

LH Aviation wishes to propose a complete concept to their customers and become a solution provider. For example, with the project named Pampa they will propose a quick response solution including an LH-10 and all its support systems in a classic container ready for emergency deployment.

From there it is very easy to imagine a drone version of the LH-10. The configuration is favorable and LH Aviation now has all the the technology necessary on hand.

But LH Aviation will not stop there. On October 21st, 2013, they announced having raised 2 M€ enabling them to pursue their growth in the international market of aerial surveillance.

So it is a dynamic and innovative  French company that is pursuing its action while also knowing how to reposition itself and adapt. I wish them all the success possible for their projects.

Having fallen in love with this plane, I also wish to see it come back to the general aviation market some day. Every time I see it, I dream of piloting one some day. When I told Sébastien Lefebvre about this dream, he did not completely close the door. So ! Maybe some day ...

I would like to thank LH Aviation and particularly Mr. Sébastien Lefebvre for the time that was given to me and the patience in answering my questions. It was a very enriching and enjoyable exchange.

For more information on the LH-10 and LH Aviation you may visit their internet site: http://www.lhaviation.com/